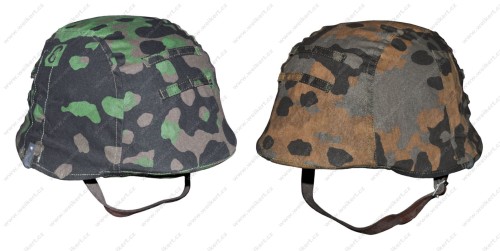 A perfect replica of the German helmet masking cover for the M35, M40, M42 helmet (Stahlhelmtarnüberzeug) - used by Waffen SS troops during World War II.
These covers were also used by Polish AK soldiers after taking the German stores during the Warsaw Uprising in 1944.

Camouflage helmet cover (Stahlhelmtarnüberzeug) was introduced in 1937. Material was printed on both sides, each side with a different pattern, which increased the possibility of its application. There was often the penetration of color on the other side, which ultimately led to the creation of unintended effects and the formation of new shades.

Opinions about the product (0)

up
Shop is in view mode
View full version of the site
Sklep internetowy Shoper.pl